The US ambassador to Panama has resigned from his post on principle, writing in a resignation letter to the State Department that he can no longer serve the Trump administration.

The US State Department confirmed the departure of John D Feeley, saying he decided to “retire for personal reasons, as of 9 March this year”.

Mr Feeley wrote in his resignation letter: “As a junior foreign service officer, I signed an oath to serve faithfully the President and his administration in an apolitical fashion, even when I might not agree with certain policies. 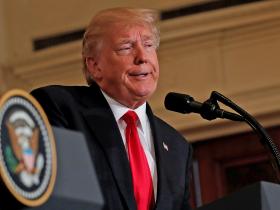 “My instructors made clear that if I believed I could not do that, I would be honour-bound to resign. That time has come.”

The State Department learned of his plans on 27 December, Reuters reported – well before the Washington Post reported Donald Trump had referred to “s***hole countries” in a meeting about immigration.

Haiti, El Salvador and unspecified African nations were said to have been among those discussed with the President at a briefing with congressional leaders.

Mr Trump has denied he used that language but admitted speaking in a “tough” manner during the Oval Office meeting on immigration reform and the Deferred Action for Childhood Arrivals (DACA) programme.

A growing number of pregnant Russian women have … END_OF_DOCUMENT_TOKEN_TO_BE_REPLACED

President Trump appeared to be coming to the … END_OF_DOCUMENT_TOKEN_TO_BE_REPLACED

We have no idea if the wildest and most memorable … END_OF_DOCUMENT_TOKEN_TO_BE_REPLACED