Joshua Harris, a founder of Apollo Global Management, was advising Trump administration officials on infrastructure policy. During that period, he met on multiple occasions with Jared Kushner, President Trump’s son-in-law and senior adviser, said three people familiar with the meetings. Among other things, the two men discussed a possible White House job for Mr. Harris.

The job never materialized, but in November, Apollo lent $184 million to Mr. Kushner’s family real estate firm, Kushner Companies. The loan was to refinance the mortgage on a Chicago skyscraper.

Even by the standards of Apollo, one of the world’s largest private equity firms, the previously unreported transaction with the Kushners was a big deal: It was triple the size of the average property loan made by Apollo’s real estate lending arm, securities filings show.

It was one of the largest loans Kushner Companies received last year. An even larger loan came from Citigroup, which lent the firm and one of its partners $325 million to help finance a group of office buildings in Brooklyn.

That loan was made in the spring of 2017, shortly after Mr. Kushner met in the White House with Citigroup’s chief executive, Michael L. Corbat, according to people briefed on the meeting. The two men talked about financial and trade policy and did not discuss Mr. Kushner’s family business, one person said.

There is little precedent for a top White House official meeting with executives of companies as they contemplate sizable loans to his business, say government ethics experts.

“This is exactly why senior government officials, for as long back as I have any experience, don’t maintain any active outside business interests,” said Don Fox, the former acting director of the Office of Government Ethics during the Obama administration and, before that, a lawyer for the Air Force and Navy during Republican and Democratic administrations. “The appearance of conflicts of interest is simply too great.”

In 2017, Jared Kushner met multiple times in the White House with leaders of at least two financial institutions that subsequently made large loans to Mr. Kushner’s family real estate business, in which Mr. Kushner retains an interest. 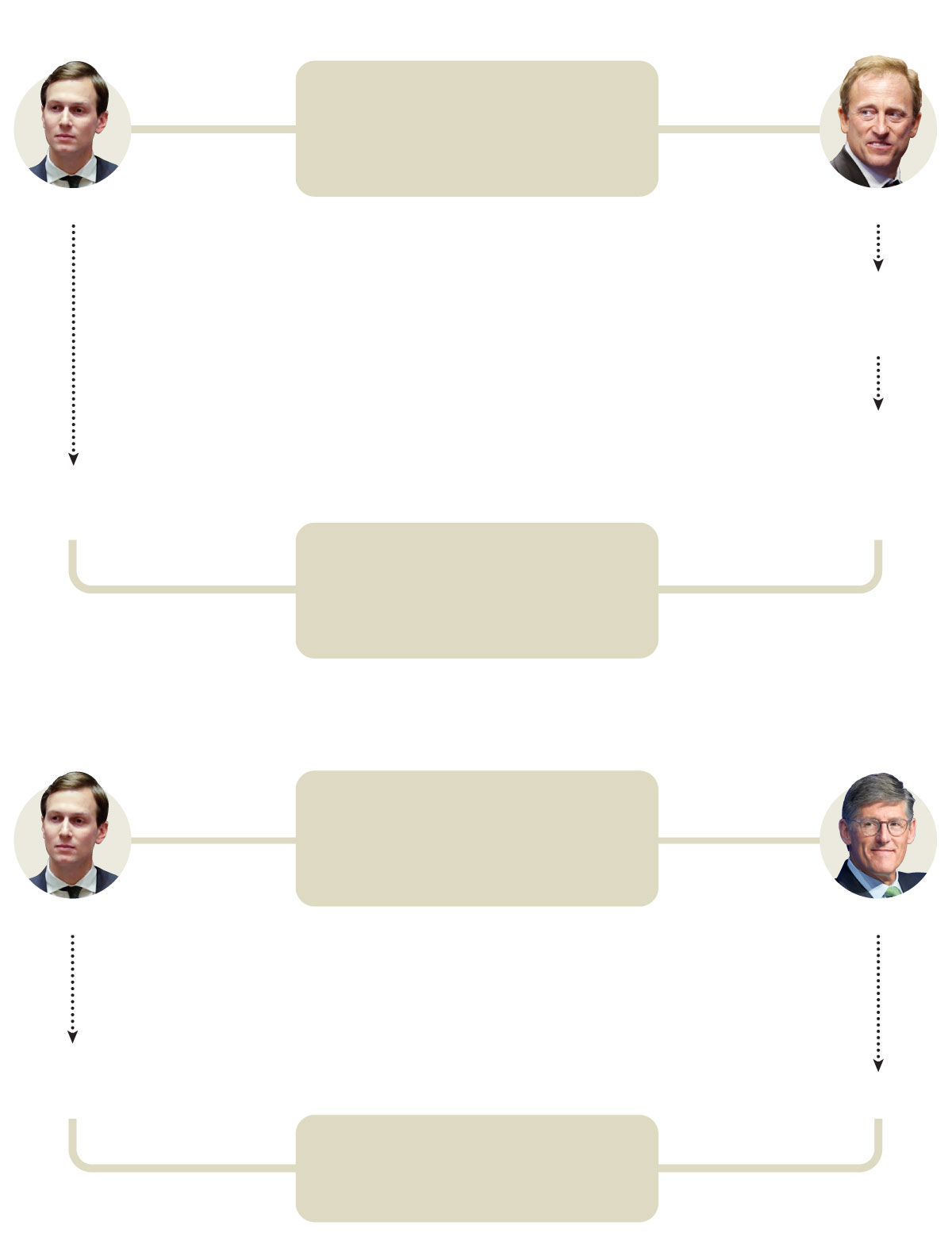 The White House referred questions to Mr. Kushner’s lawyer, Abbe Lowell, who did not dispute that the meetings between Mr. Kushner and the executives took place.

Peter Mirijanian, a spokesman for Mr. Lowell, said in a statement that Mr. Kushner “has met with hundreds of business people.” He said that Mr. Kushner “has taken no part of any business, loans or projects with or for” Kushner Companies since joining the White House and that he has followed ethics advice.

Christine Taylor, a spokeswoman for Kushner Companies, said Mr. Kushner’s White House role had not affected the company’s relationships with financial institutions. “Stories like these attempt to make insinuating connections that do not exist to disparage the financial institutions and companies involved,” she said.

An Apollo spokesman, Charles V. Zehren, said Mr. Harris was not involved in the decision to loan money to Kushner Companies. He said the loan “went through the firm’s standard approval process.”

A Citigroup spokeswoman, Danielle Romero-Apsilos, said Kushner Companies had been a bank client since before the election and that the relationship had no connection to Mr. Kushner’s White House role. She said Citigroup negotiated the 2017 loan with Kushner Companies’ business partner, a real estate developer.

Mr. Kushner’s tenure in the White House has been dogged by questions about conflicts of interest between his government work and his family business, in which he remains heavily invested. Mr. Kushner steers American policy in the Middle East, for example, but his family company continues to do deals with Israeli investors.

This blurring of lines is now a potential liability for Mr. Kushner, who recently lost his top-secret security clearance amid worries from some United States officials that foreign governments might try to gain influence with the White House by doing business with Mr. Kushner.

Investigators working for Robert S. Mueller III, the special counsel looking into Russian interference in the 2016 election, have asked questions about Mr. Kushner’s interactions with potential investors from overseas, according to a person familiar with the matter. Mr. Kushner’s firm has sought investments from the Chinese insurer Anbang and from the former prime minister of Qatar.

Mr. Mirijanian, the spokesman for Mr. Kushner’s lawyer, said that Mr. Mueller had not sought from the Kushner Companies or Mr. Kushner “any information or document concerning any business dealing either has had.”

Mr. Kushner resigned as chief executive of Kushner Companies when he joined the White House last January, and he sold a small portion of his stake in the company to a trust controlled by his mother.

But he retained the vast majority of his interest in Kushner Companies. His real estate holdings and other investments are worth as much as $761 million, according to government ethics filings. They are likely worth much more, because that estimate has his firm’s debt subtracted from the value of his holdings. The company has done at least $7 billion of deals in the past decade.

Public filings show that Mr. Kushner still owns part of the company that received the Apollo loan. The loan was used to refinance a Chicago skyscraper that is the Midwest headquarters for AT&T. Mr. Kushner also still holds a stake in the entity that owns the Brooklyn buildings and received the loan from Citigroup.

Federal ethics regulations restrict government employees from participating in some matters that involve companies with which the official is seeking “a business, contractual or other financial relationship that involves other than a routine consumer transaction.”

Mr. Fox, the ethics expert, said Mr. Kushner risked violating the regulations in his meetings with Citigroup and Apollo executives.

“Why does Jared have to take the meeting?” he asked. “Is there not somebody else who doesn’t have these financial entanglements who can brainstorm freely with these folks?”

The Trump administration no longer publicly discloses logs of visitors to the White House. In February, the White House settled litigation with Public Citizen, a nonprofit organization, and agreed to disclose some of that information.

Mr. Kushner has also met at the White House with Stephen A. Schwarzman, chief executive of the private equity firm Blackstone, which in the past has lent money to Kushner Companies for several projects, though all before the election. Until August, Mr. Schwarzman was the head of a White House business advisory council.

“Blackstone has not done any business with Kushner Companies since the election, nor has Steve ever discussed private business matters with Mr. Kushner,” said a Blackstone spokeswoman.

All of the executives who met with Mr. Kushner have lots to gain or lose in Washington.

Apollo has sought ways to benefit from the White House’s possible infrastructure plan. And its executives, including Mr. Harris, had tens of millions of dollars personally at stake in the tax overhaul that was making its way through Washington last year.

Citigroup, one of the country’s largest banks, is heavily regulated by federal agencies and, like other financial companies, is trying to get the government to relax its oversight of the industry.

Mr. Kushner has reported owning hundreds of partnerships, limited liability companies and other entities, but he is not required to disclose the lifeblood of any real estate firm’s business: its lenders and outside investors.

Some of the lenders can be pieced together through public records. The Apollo loan is disclosed in Chicago mortgage filings, which list the lender as “ACREFI Holdings J-I, LLC.” That vehicle is owned by Apollo’s real estate investment trust, securities filings show.

The loans’ interest rates and other key provisions are not disclosed.

Apollo, best known for investing in companies such as Caesars Entertainment and Norwegian Cruise Lines, was founded by Mr. Harris, Marc Rowan and its current chief executive, Leon Black. Mr. Black and Mr. Kushner sat next to each other at the 2016 US Open, a few months before the presidential election.

Mr. Harris, a co-owner of the Philadelphia 76ers and the New Jersey Devils, is Apollo’s senior managing director. He also is an adviser to the Federal Reserve Bank of New York.

Early last year, the White House enlisted Mr. Harris and other executives to advise the administration on infrastructure policy. Over a period of months, Mr. Harris met regularly with Mr. Kushner and other White House officials.

Apollo made the loan to Kushner Companies on Nov. 1, 2017, according to public records.

Apollo does not make real estate loans directly. Instead, it makes them through a so-called real estate investment trust, called Apollo Commercial Real Estate Finance. The trust is a publicly traded company with its own set of shareholders. It is managed by Apollo, which charges the trust management fees, and has no employees of its own.

One of the largest investors in Apollo’s real estate trust is the Qatari government’s investment fund, the Qatar Investment Authority.

Mr. Kushner’s firm previously sought a $500 million investment from the former head of that Qatari fund for its headquarters at 666 Fifth Avenue in Manhattan. That investment never materialized.

Shortly after Kushner Companies received the loan from Apollo, the private equity firm emerged as a beneficiary of the tax cut package that the White House championed. Mr. Trump backed down from his earlier pledge to close a loophole that permits private equity managers to pay taxes on the bulk of their income at rates that are roughly half of ordinary income tax rates. The tax law left the loophole largely intact.

A pro-Israel charity has scheduled a fundraiser … END_OF_DOCUMENT_TOKEN_TO_BE_REPLACED

"This is a really tragic day," said Rep. Ted … END_OF_DOCUMENT_TOKEN_TO_BE_REPLACED