A Fox News anchor has fact checked President Donald Trump’s claims that the investigation into Russian meddling in the 2016 campaign is a “hoax”.

Their finding? The investigation is very real.

“The President [is] again calling the Russia investigation a Democratic hoax. It is not,” anchor Shep Smith said Wednesday. “Fox News has been reporting, and will continue to report that two people have pleaded guilty. Mike Flynn, the national security adviser: guilty of lying to the FBI about matters Russia.” 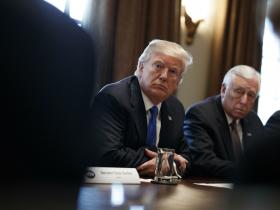 Trump calls for Republicans to take over Russia investigation

“George Papadopoolous, former Trump foreign policy adviser: Guilty of lying to the FBI about communications with people reported to be from the Russian government,” Smith continued.

Mr Manafort and Mr Gates have pleaded not guilty to the charges filed against them, and Mr Manafort has counter-sued saying that Mr Mueller’s probe did not have the authority to file the charges.

The biggest names involved in the Trump-Russia investigation

Smith’s comments appeared to be in response to a tweet from Mr Trump earlier in the day in which the President said that there had been no collusion, and called the investigations the “single greatest Witch Hunt in American history”.

“The single greatest Witch Hunt in American history continues,” he wrote. “There was no collusion, everybody including the Dems knows there was no collusion, & yet on and on it goes. Russia & the world is laughing at the stupidity they are witnessing. Republicans should finally take control!”

It was unclear which investigation Mr Trump may have been advocating Republicans take control over. The GOP currently controls both chambers of Congress, and Mr Mueller’s investigation is a Justice Department-established, independent enterprise

Donald Trump has gone back to publicly insisting … END_OF_DOCUMENT_TOKEN_TO_BE_REPLACED

The Trump administration has waived part of the … END_OF_DOCUMENT_TOKEN_TO_BE_REPLACED