As president of the United States, Donald Trump may now mostly confine his many golf weekends to just that — playing golf.

That summer weekend, the resort was once again hosting the annual American Century Celebrity Golf Championship. At the time, Trump was a star of NBC’s reality show “The Apprentice,” and his wife was home with their 4-month-old baby son Barron.

Other big names participating in the three-round tournament were NFL stars Aaron Rodgers, Drew Brees and Ben Roethlisberger, as well as Olympic skier Bode Miller and entertainers such as Ray Romano and Cheech Marin.

A report in the Wall Street Journal Friday, citing interviews with people close to Clifford, said that the actress struck up an acquaintance with Trump that led to a sexual encounter that weekend and then to an affair.

A lawyer for President Donald Trump arranged a $130,000 payment to a former adult-film star a month before the 2016 election as part of an agreement that precluded her from publicly discussing an…

But there’s more to the story, including Trump’s possible answer to that age-old question asked of men, including most recently of former President Barack Obama: “Boxers or briefs.”

In a story in the Daily Beast, Evans said she was Clifford’s neighbor and close friend at the time, and she was staying in the Lake Tahoe area that weekend. She ran into Clifford while she was at a hotel getting a tattoo. She said Clifford told her about the golf tournament, how she met Trump and how she was supposed to hang out with him later that night. Evans said Clifford invited her to come, too.

Evans said Clifford in fact called her at her hotel room later that night, asking her to come and join the “party” she was having with Trump.

“Stormy calls me four or five times, by the last two phone calls she’s with Donald [Trump] and I can hear him, and he’s talking through the phone to me saying, ‘Oh come on Alana, let’s have some fun! Let’s have some fun! Come to the party, we’re waiting for you.’”

Evans begged off, mostly because she said powerful men like Trump scare her. The next day, she said she ran into Clifford, who began to tell her a little bit about her night with Trump.

“She tells me, ‘All I’m going to say is: I ended up with Donald in his hotel room. Picture him chasing me around his hotel room in his tighty-whities.’ I was like, ‘Oh I really didn’t need to hear that!’” Clifford told Evans Trump offered her the keys to his condos in Florida. “I was like, ‘Wow guess you had a good night,’ and that was the last we ever spoke of it.”

It turns out that Jessica Drake didn’t have such a good experience with Trump that weekend in Lake Tahoe. In fact, in the month before the election, Drake became the 14th woman to accuse the then-Republican presidential nominee of sexual harassment or assault.

During a press conference with her attorney Gloria Allred, Drake said that Trump flirted with her as she was working the Wicked Pictures booth, the Daily Beast reported. He then invited her to walk along the golf course with him, which she did. 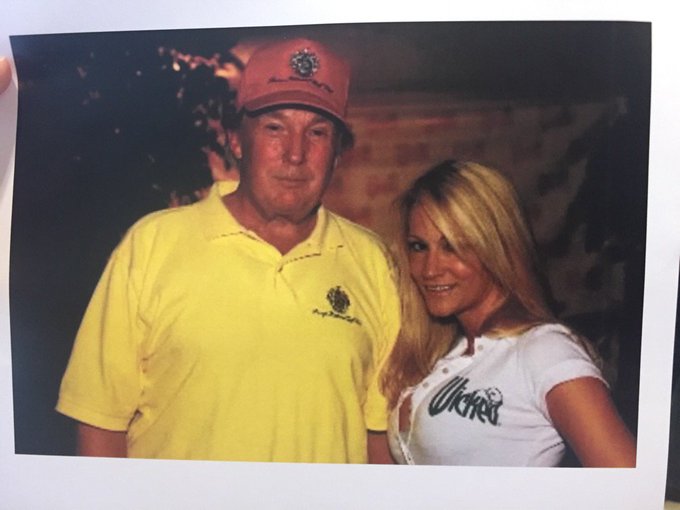 Drake with #DonaldTrump at Tahoe event in 2006. Pic courtesy of Jessica Drake and @GloriaAllred

She gave him her phone number, and he called her later that evening and invited her to his room. “I said I didn’t feel right going alone, so two other women came with me,” she said at the press conference.

That apparently was OK with Trump.

Drake said Trump called yet again to offer her $10,000 for sex. Drake, a certified sex educator who has been outspoken on her views on national politics, consent and feminism, said she didn’t believe this was “acceptable behavior for anyone, much less a presidential candidate.” She also called Trump a “sexual assault apologist.”

The gist of the Wall Street Journal’s story Friday is that Michael Cohen, a longtime attorney for the Trump organization, arranged a $130,000 payment to Clifford a month before the 2016 election in order to buy her silence about her alleged sexual relationship with Trump.

But it turns out it might not have been unusual for Trump’s lawyers to make such arrangements with women.

That’s according to Trump’s former campaign chairman and White House strategist Steve Bannon, said the Business Insider. In Michael Wolf’s tell-all book about the Trump White House, the now disgraced Bannon said that another of the president’s longtime attorneys, Marc Kasowitz, “took care” of 100 women during the presidential campaign.

The passage read: “Look, Kasowitz has known [Trump] for twenty-five years. Kasowitz has gotten him out of all kinds of jams. Kasowitz on the campaign — what did we have, a hundred women? Kasowitz took care of all of them.”

As with other assertions made in Wolf’s book, including those attributed to Bannon, a spokesperson for the relevant person involved denied the claims being made. A spokesman for Kasowitz told the Business Insider that Bannon’s claim concerning the 100 women is false.

Sen. Bob Corker (R-Tenn.), who has clashed with … END_OF_DOCUMENT_TOKEN_TO_BE_REPLACED