President Donald Trump has reportedly referred to Haiti and African countries as “s***hole countries” during a meeting with congressional leaders in the Oval Office.

After ideas for restoration projects to help immigrants in Haiti, El Salvador, and African countries were floated as a potential part of a bipartisan immigration deal, the President grew frustrated.

“Why are we having all these people from s***hole countries come here?” Mr Trump asked, two people briefed on the meeting told the Washington Post. 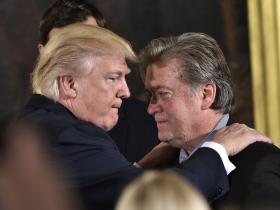 Bannon to be questioned by Trump-Russia investigators

Mr Trump then reportedly suggested that the United States should instead bring more people from countries like Norway, a country whose prime minister met with the President Wednesday.

The members of Congress were meeting with Mr Trump as a part of efforts to find a solution to America’s immigration problems, which Mr Trump made a central theme of his campaign.

Since taking office, Mr Trump has ended Temporary Protected Status (TPS) for several groups in the US, including for Haitians and for people from El Salvador. Haitians became able to apply for TPS following the 2010 earthquake that devastated the Caribbean island nation, and from which Haiti has still not recovered. People from El Salvador qualified for the program as a result of the dangerous conditions they faced back home, where murder rates have skyrocketed as a result of gang violence there.

The President has said that he would not consider an immigration overhaul unless money is put aside to fund the construction of his much talked about border wall, even though that wall is anything but popular among members of Congress.

The Oval Office are just the latest instance in which Mr Trump has referred to Haitians in a questionable manner. Earlier reports indicated that Mr Trump had expressed disgust for immigrants from Haiti, and claimed that all of the individuals coming to the US from the island have “AIDS”.

The US ambassador to Panama has resigned from his … END_OF_DOCUMENT_TOKEN_TO_BE_REPLACED

President Trump is making an appearance for the … END_OF_DOCUMENT_TOKEN_TO_BE_REPLACED

You have a new governor, New Jersey. Phil … END_OF_DOCUMENT_TOKEN_TO_BE_REPLACED